A Note from Patricia...

The explosion of blooms through spring and summer are coming to an end. We still have a dwindling row of cosmos and zinnias on the west fence. The starring role this month goes to the row of Lespedezia that are planted in the center. They have matured to 6x 9 feet fountains of pink flowers and are gorgeous in the breeze.
Some cleaning and tidying has been done and of course, Simon Wilhoit keeps it all looking cared for and neat with the weekly mow and trim. Jerry Kische is extending the life of the Annabelles on the East fence with regular watering. They are the best looking Annabelles in Greene County thanks to his care.
Randi Nott had a successful morning at the August Ask Us booth at the Depot Street Farmer’s Market. She has propagated New Hope’s historic black oak tree acorns to seedlings over the past year. At the Market, she gave away the remaining 8 plants she had along with the New Hope Black Oak pamphlet. They went quickly. There was a lot of interest in the history of the tree, and many stated they would visit NH for the purpose of visiting the Sentinel Oak.
Randi also has plans to work on getting New Hope a “Smart Yards” designation.
Patricia Hayes had a serendipitous encounter with local artist, Jean Berg. I mentioned NH and the need we have for art in the garden, and that I had been hoping for some peace poles in particular. Jean had experience with making those and has generously agreed to make us one. We are so very excited about this as it is has been a desire of this project for many years. More to come on this great news!
Patricia has gotten our pollinators sign made and placed at the front of the cemetery. It invites the public to come and see how we are using our garden as an example of how a small garden can make a difference to wildlife. We have the hope that others will want to do the same.
We have just printed and added our educational pamphlets to the holder made by Bill Flanery.
Pamphlets are Butterflies of Tennessee (with several host and nectar plants listed), Native Plants of New Hope Cemetery and Community Garden, How to Attract Butterflies to Your Garden, The Sentinel Black Oak, Lawn Care at New Hope, National Wildlife Federation Garden for Wildlife Checklist, and Planting Acorns: How to Plant an Acorn and Grow a Tree.
If anyone has additional information, they would like to make into an educational resource for this project, please contact one of us.
Workday to be announced soon as we need to move some plants to settle before frost, and as always - the need to tidy.
Patricia Hayes 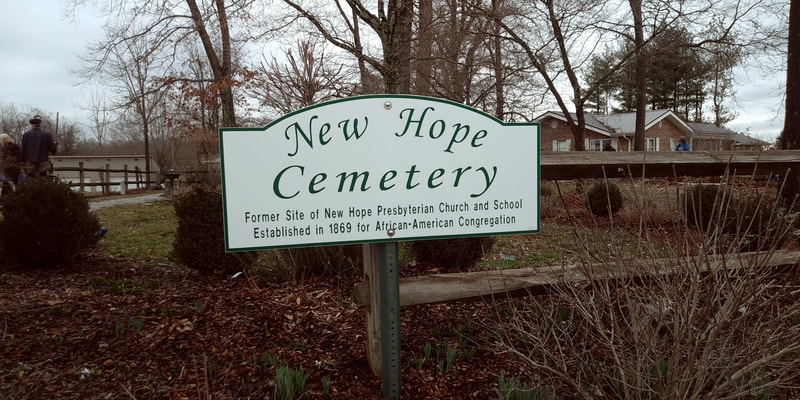 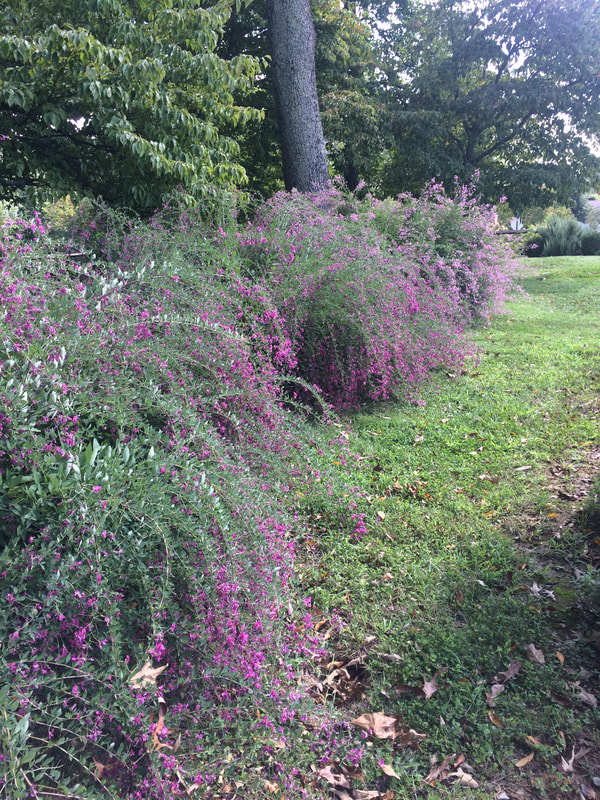 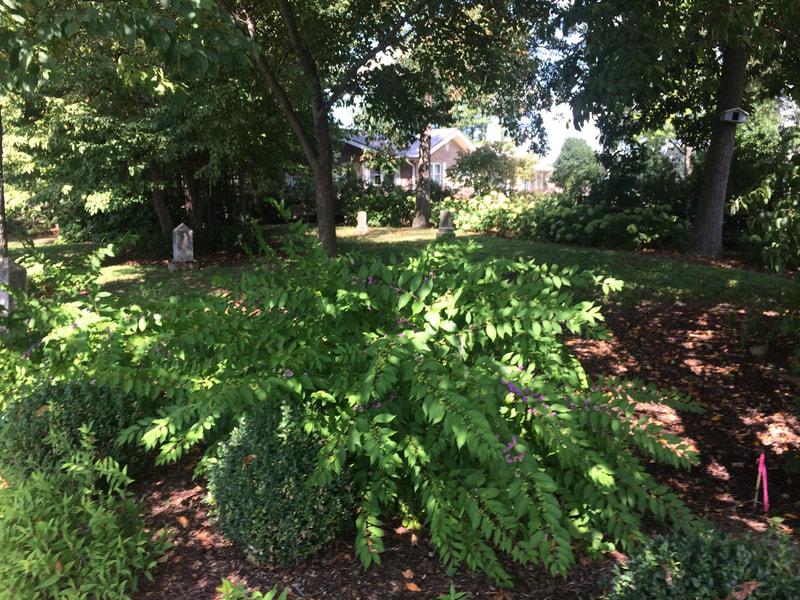 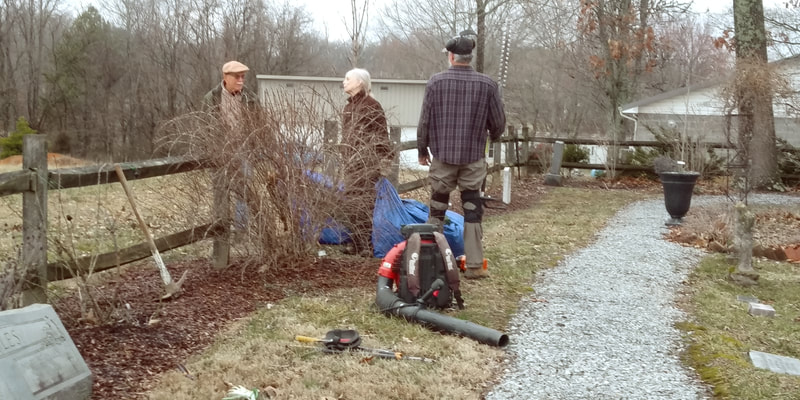 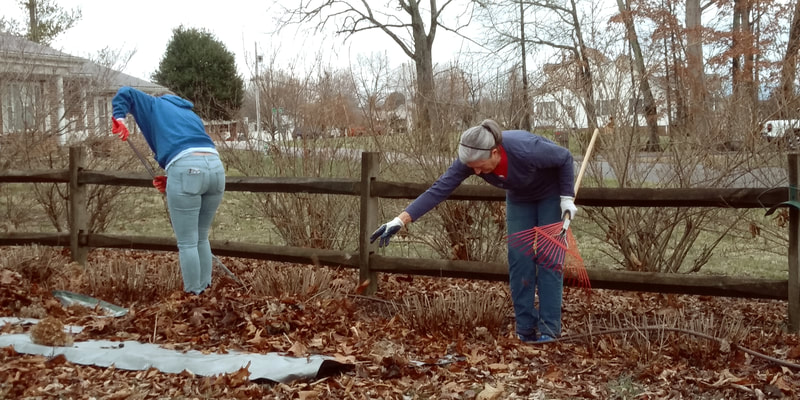 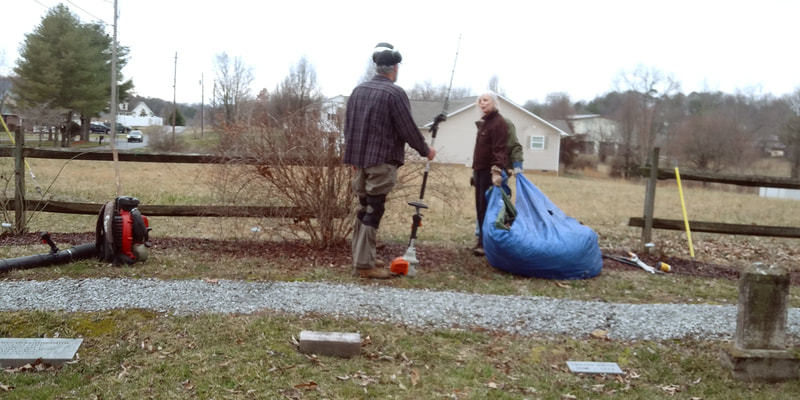 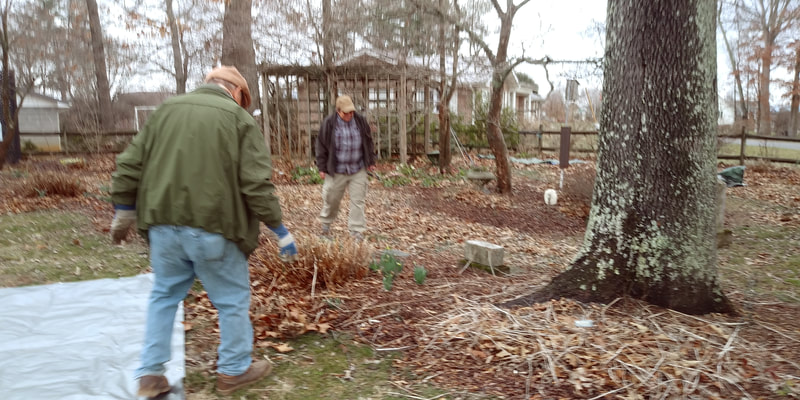 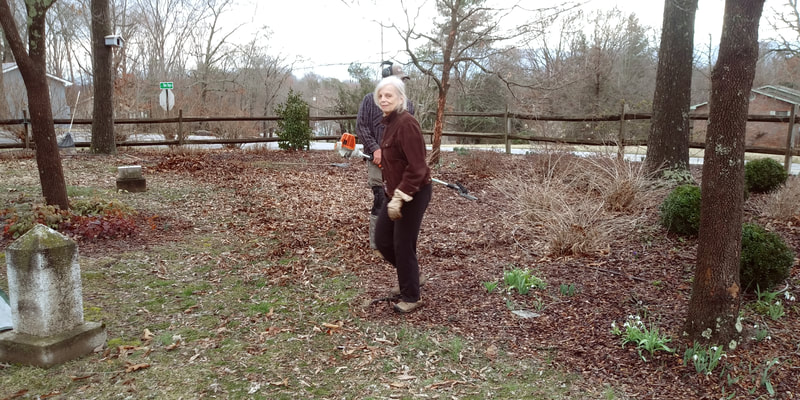 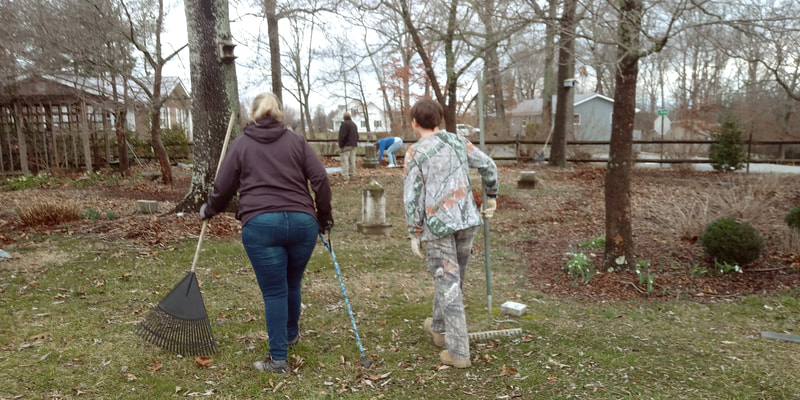 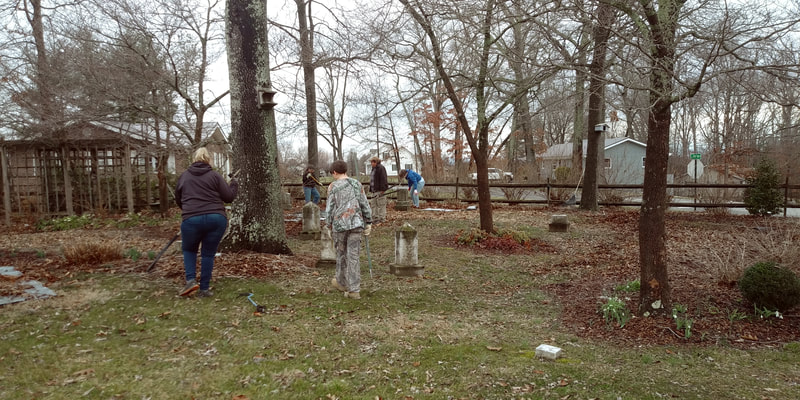 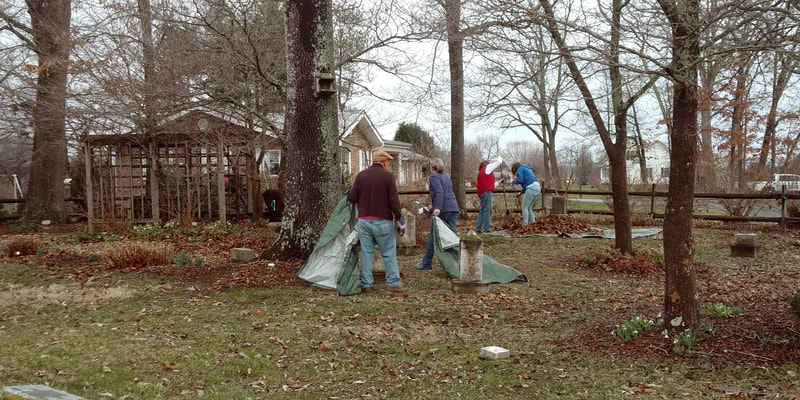 The New Hope Presbyterian Cemetery was established about 1908 and is located at the corner of Old Shiloh Road and New Hope Road in Greeneville, Tennessee. The mission of this project is “Restoring sacred ground, consecrated and dedicated to the memory of African Americans, many of whom died as former slaves, and preserving it in a condition and appearance worthy of such a memorial to all who came to East Tennessee to search for and to find eventual freedom.”

The New Hope Presbyterian Church was founded in 1869 by former slaves and was one of the first African-American churches in Greene County. The church disbanded in the 1960s and from all accounts, the cemetery had already been abandoned for at least a decade before. The cemetery is all that remains of the New Hope community, which was centered on the church, its cemetery, and a segregated one room school house. The Big Spring Master Gardener Association (BSMGA) of Greene County is currently involved in conserving the only remaining evidence of this historic community.

Fifty-four people are buried in the New Hope Cemetery. A rededication ceremony was held September 18, 2010 to officially recognize the beginning of the rehabilitation efforts for the cemetery to the citizens of Greene County, Tennessee. Through many hours of historical research, a local Master Gardener discovered many unique attributes of the cemetery and its significance to African American culture, as well as the overall Greene County community. As a result, the BSMGA voted to take on the task of conserving this aspect of Greene County African American heritage for (1) both current and future generations of people buried there, (2) neighbors of the cemetery, (3) the Greeneville and Tusculum communities, (4) and Greene County citizens. The BSMGA also wanted to be of assistance to other cemetery restoration teams nationwide in hopes of providing educational assistance with the overall rehabilitation process.

A team of thirteen Master Gardeners assisted with various aspects of this ongoing project throughout the last two years. A committee of three individuals within the BSMGA forged the path for the New Hope Cemetery Project to become a reality. One individual, through her hard work, dedication, and research set forth this project in motion. She worked tirelessly researching the significance of the cemetery to the history of the community and the county. Her leadership recruited the assistance of many organizations and individuals within the county. Through her passion and perseverance, the BSMGA took on this exciting project and has worked diligently to make this project a success.

Two additional Master Gardener volunteers formed the BSMGA New Hope Cemetery committee. Those two members were from a very distinct and diverse background as well, offering their own visions on each of the primary goals set forth in the project scope. One individual significantly impacted the overall scope of the landscape plan by researching “dry-shade” gardening techniques and plants. Her diligence to specific details gave the cemetery a unique personality all its own. A retired schoolteacher was also instrumental in the educational component of the project, encouraging a long-term plan for the community in regards to learning the plants and their purpose within the cemetery.

Several Master Gardeners assisted with the cleanup process of the cemetery, whereas others were available to take lead in the educational roles when there were college students on site. Many of the Master Gardeners helped haul loads of mulch and fill-dirt in their personal vehicles and provided their own gardening and landscaping equipment for the team to utilize in the rehabilitation process. Master Gardeners gave above and beyond by contributing a significant portion of their personal time to watering on a regular schedule during the summer months.

The BSMGA worked closely with several organizations in Greene County to make the rehabilitation project a success, including Tusculum College. Robin Fife, professor in the Social Science Department, was instrumental by involving her service-learning class on a large scale basis to assist with many aspects of the overall project.

The “New Hope Cemetery Association” (the governing board) was formed to offer direction and guidance to the project and to assist with collecting donations to perform most of the much needed tasks to clean-up and revive the cemetery.   The Association consists of four clergy within both the Cumberland Presbyterian and Presbyterian Church system.

In beginning the process, we utilized the knowledge of Katherine Ambroziak, a professor at University of Tennessee in the Architecture Department. Based on her current involvement with the restoration of two cemeteries in the Knoxville area, she was able to give our team insight in how to proceed with the endeavor. The students at Tusculum College actually visited the cemetery sites in Knoxville to learn the mapping and documentation process first-hand.

To assist with the identification of those buried at New Hope Cemetery, we relied on information obtained from public records. Jody Palm, manager of FIND-A-GRAVE website (www.findagrave.com), which contains listings of cemeteries and graves globally, added New Hope Cemetery to the website. FIND-A-GRAVE is a commercial website providing free access and input to an online database of cemetery records. Family members of the deceased were also very instrumental in the identification process.

The Greene County Heritage Trust was also instrumental in the partnering process. They recognized the efforts of the Restoration Team as being of great historical significance to the preservation of Greene County’s history. Therefore, the “New Hope Cemetery Reclamation Project” received a special Award of Merit on December 2, 2010 as a result of their efforts in conserving the New Hope Cemetery.

In regards to total donations, $1,290.00 in cash was donated to the New Hope Cemetery Association for various projects at the cemetery (cleaning & straightening tombstones,

Almost 70% of the money donated came from New Hope family members, who all lived out of state.  The remaining 30% came from community and church organizations within Greene County.  A total of $236.00 in plant material from a local nursery was also donated.

Lastly, but certainly not least, there were many others instrumental in making this BSMGA project a success. They included:

Overall, there were three main goals the Restoration team set out to achieve:

•  Design and implement a safe place with no tripping hazards for descendants and members of the community to enjoy while paying their respects at the cemetery.  The cemetery was overgrown with trees and weeds, to the extent that even next-door neighbors to the cemetery had no idea it existed. Graves were sunken in and many stumps were scattered throughout the cemetery. As these were hazards, the team focused on a strategy to improve the overall safety within the cemetery.

•  Conserve the original artifacts on site and document what the cemetery looked like prior to any rehabilitation efforts, to maintain the cemetery as an African American heritage site. This consisted of noting all stones, stumps, trees, tombstones, shrubbery, etc. in order to conserve the natural beauty of the cemetery. This also afforded us the opportunity to recognize what was there prior to the rehabilitation efforts and how NOT to interfere with the addition of anything not noted during the cemetery’s years. For example, for reasons unknown to the team, no religious iconography was noted on the tombstones, or any references to God. Therefore, the team decided NOT to construct crosses in the cemetery or to reflect these references in the conservation of the cemetery. Our purpose was to conserve the cemetery to its natural state.

•  Develop visual harmony with the neighborhood and utilize the cemetery as an outdoor classroom. As stated in the first point, the cemetery was in a tremendous state of overgrowth and had been unkempt for more than 50 years. Therefore, upon clean-up, the team wanted a landscape plan that would serve two purposes: 1) continuity within the existing community and 2) reflection on the African American culture in the early 20th century (note the cemetery was post-Victorian era). We also want individuals visiting the cemetery to recognize the importance of the plants chosen to beautify the landscape. This includes college students, descendants, and community citizens.

As a result of the hard work, dedication, sweat, blood and tears that were poured into this project, the New Hope Cemetery project won the “Innovative Search for Excellence Award” in February 2012 at the Master Gardener Winter School in Murfreesboro.